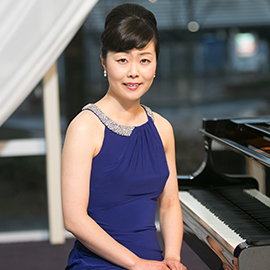 Yuri is the General Manager of the Ryuji Ueno Foundation. Her responsibilities include implementing Dr. Ryuji Ueno’s vision for the Foundation and furthering its mission, and coordinating the Evermay Concert Series, Potomac Music Lab, and other Foundation events.

Yuri is an accomplished musician herself. After graduating from college in Japan, she spent five years in Germany studying music at the Musikhochschule in Detmold and Aachen. After receiving her Master’s Degree, she came to the United State to continue her studies and received a Doctor of Musical Arts in Piano Performance from the University of Arizona. Her dissertation explored the influence of modern art on Toru Takemitsu’s piano works.

Yuri has received awards in international competitions and has performed recitals in Japan, Germany, and the United States. Her recordings of Chopin, Liszt, Debussy, and Takemitsu have been played on classical radio stations in the United States and Japan.

After moving to Washington, D.C. in 2012, Yuri has volunteered with the Smithsonian Chamber Music Society concert series, assisted with performances at the Library of Congress and the Friday Morning Music Club, and interned at S&R Foundation as Arts Program Coordinator.