Program will consist of a variety of repertoire including:

Tchaikovsky: Piano Trio in A minor, Op. 50 "In Memory of a Great Artist" 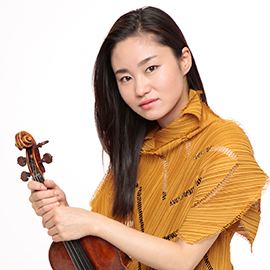 Educated in Siena at the Accademia Musicale Chigiana and Cologne at the Hochschule für Musik Köln under Zakhar Bron, the Japanese violinist Sayaka Shoji has been described by Gramophone magazine as "a formidable musician, able to draw on huge reserves of stamina and the unflinching equal of anything thrown at her."

Shoji was the youngest and first Japanese violinist to win the Paganini Competition in Genoa in 1999 and since then has established strong connections with world renowned conductors including; Zubin Mehta, Vladimir Ashkenazy, Mariss Jansons, Paavo Järvi, Osmo Vänska and Sir Antonio Pappano. Highlights last season included tours to Japan with The Mariinsky Orchestra under the baton of Valery Gergiev and concerts with Noseda and Accademia di Santa Cecilia. Other highlights include a tour with the NHK Symphony Orchestra for Mendelssohn's Double concerto with Vikingur Olafsson conducted by Vladimir Ashkenazy, the Tonkünstler-Orchester Niederösterreich with Yutaka Sado and the new Würth Philharmoniker with Leo Hussain.

A prolific recording artist, the violinist has recorded a number of albums for Deutsche Grammophon, including the full violin sonatas by Beethoven, and more recently with the St Petersburg Philharmonic Orchestra and Yuri Temirkanov concertos by Sibelius and Beethoven. With Yutaka Sado and the Tonkunstler Orchester, Shoji has recently released a live disc of Bernstein's Serenade recorded in the Musikverein in Vienna. Other live recordings include sonatas by Mozart, Schubert and Brahms recorded live with Menahem Pressler in April 2014.

Sayaka performs regularly with her long-time mentor and supporter, Yuri Temirkanov and most recently appeared as the only non-Russian musician to perform at his 75th birthday gala concert in St Petersburg. The pair have toured extensively with the St Petersburg Philharmonic Orchestra to much of Europe, Japan, Mexico, Russia and the USA.

The 2018/19 season will again see Sayaka join the SPPO and Temirkanov for concerts in Rome, Udine, Bari and Milan playing Tchaikovsky's Violin Concerto as well as a tour in Japan. She will make debuts with the Iceland Symphony Orchestra and Klaus Makkela and the Beethoven Orchestra Bonn with Dirk Kaftan. Sayaka will work with Krzysztof Penderecki performing his concerto with Orchestra Metropolitana de Lisboa.

In a change to her usual performance practice, Sayaka has also created an experimental visual art project, 'Synesthesia' where she mixes music and colours with the aim to transform her musical perception into different forms.

In January 2016, Sayaka received the Mainichi Art Award, one of Japan's most prestigious awards presented to those who have had a significant influence on the arts.

Sayaka plays a 1729 Recamier Stradivarius which is kindly loaned to her by Ueno Fine Chemicals Industry Ltd. 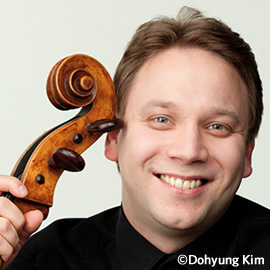 Dmitri Atapine has been described as a cellist with "brilliant technical chops" (Gramophone), whose playing is "highly impressive throughout" (The Strad). As a soloist and recitalist, he has appeared on some of the world's foremost stages, including Alice Tully Hall at Lincoln Center, Zankel and Weill halls at Carnegie Hall, Chicago Cultural Center, and the National Auditorium of Spain. An avid chamber musician, Mr. Atapine has appeared with The Chamber Music Society of Lincoln Center and will begin a three-year residency as member of CMS Two in 2015. His frequent festival appearances have included Music@Menlo, Chamber Music Northwest, La Musica Sarasota, Nevada Chamber Music Festival, Cactus Pear Music Festival, Pacific Music Festival, Aldeburgh Festival, and Aix-en-Provence Festival among many others, with performances broadcast on radio and television in Spain, Italy, the United States, Canada, Mexico, and South Korea.

Mr. Atapine's multiple awards include top prizes at the Carlos Prieto International, the Florian Ocampo, and the Llanes cello competitions, as well as the Plowman, New England, and the Premio Vittorio Gui chamber competitions. His recent engagements have included collaborations with such distinguished musicians as Cho-Liang Lin, Paul Neubauer, Ani and Ida Kavafian, Wu Han, Bruno Giuranna, David Shifrin, and the St. Lawrence String Quartet. Mr. Atapine's recordings, among them a world-premiere of Lowell Liebermann's complete works for cello and piano, can be found on the Naxos, Albany, Urtext Digital, BlueGriffin and Bridge record labels.

Mr. Atapine holds the doctorate degree from Yale School of Music, where he was a student of Aldo Parisot. Born into a family of musicians, his teachers have included Alexander Fedortchenko and Suren Bagratuni. The Artistic Director of Ribadesella Chamber Music Festival (Spain) and Apex Concerts (Nevada), he is the cello professor at the University of Nevada, Reno and is a member of The Chamber Music Society of Lincoln Center's CMS Two program.