Paul Wiancko: LIFT for String Quartet
(Commissioned by the Caramoor Center for Music and the Arts for the Aizuri Quartet, 2016) 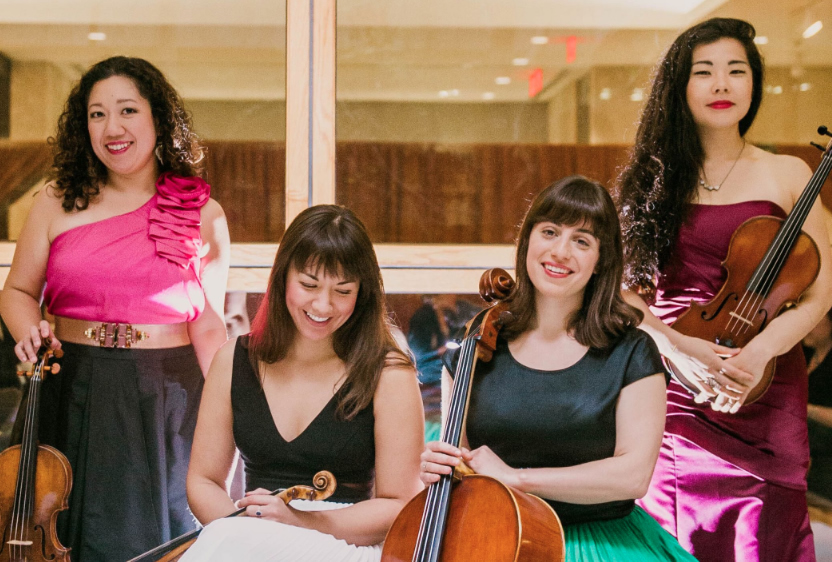 Praised by The Washington Post for "captivating" performances that draw from its notable "meld of intellect, technique and emotions," the Aizuri Quartet was awarded First Prize at the 2017 Osaka International Chamber Music Competition in Japan, and Third Prize at the 2015 Wigmore Hall International String Quartet Competition in London. Through its engaging and thought-provoking programs, the Quartet has garnered critical acclaim for bringing "a technical bravado and emotional power" to bold new commissions, and for its "flawless" (San Diego Union-Tribune) performances of the great masterpieces of the past in which "every note is lovingly crafted and savored" (Washington Post).

Based in New York City, the Aizuri Quartet is the 2017-2018 String Quartet-in-Residence at the Metropolitan Museum of Art, presenting five unique programs throughout the season. Previously the Quartet was the 2015-2016 Ernst Stiefel String Quartet-in-Residence at the Caramoor Center for Music and the Arts, and from 2014-2016, the String Quartet-in-Residence at the Curtis Institute of Music in Philadelphia. Throughout its residency, the Quartet appeared internationally in Curtis on Tour performances in Bremen, Dresden, Paris and Salzburg, in Aspen, Logan, Napa, La Jolla and Davis with clarinetist Michael Rusinek, at Boston's Isabella Stewart Gardner Museum and New York City's Morgan Library and Museum with cellist Peter Wiley, and throughout Chile, Costa Rica and Mexico with violist Roberto Díaz. Additionally, the Quartet was the resident ensemble of the 2014 Ravinia Festival's Steans Music Institute.

Combining their deep study of classical music with a naturally warm and exuberant approach to audiences and students, the Aizuri Quartet is passionate about creating diverse points of entry into the string quartet repertoire. As its 2015 resident ensemble, the Quartet worked closely with Philadelphia's Barnes Foundation to develop programs and commission new works that forged meaningful connections between music and visual art. The Quartet was featured throughout the Curtis-Coursera online course "The World of the String Quartet," which was hosted by Arnold Steinhardt and has reached thousands of students from over a hundred countries.

Comprising four distinctive musical personalities, "each one a magnificent musician in her own right" (Washington Post), the Aizuri Quartet "is in full possession of that most elusive of string quartet qualities: the balance between charisma of the individual and cohesion of the collective" (Philadelphia Inquirer). Formed in 2012, the Aizuri Quartet draws its name from "aizuri-e," a style of predominantly blue Japanese woodblock printing that is noted for its vibrancy and incredible detail.