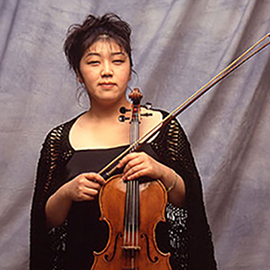 Yoshiko Kawamoto is the winner of the highest prize (2nd prize without 1st prize winner) at the renowned Geneva Competition in 1992. She was also awarded Muramatsu Award in 1996 and the Fresh Artists Prize at the 7th Nippon Steel Music Prized in 1997. After serving as the principal player at the Tokyo Metropolitan Symphony Orchestra, Kawamoto is now active both in solo and chamber music activities. She is a member of the Kyoto Alti String Quartet and AOI residence quartet.

After serving as first violist in the Tokyo Metropolitan Symphony Orchestra, Kawamoto has been one of the most active viola soloists and chamber musicians. She is a member of Kyoto Alti String Quartet and AOI Residence Quartet.

Kawamoto changed her instrument to viola when she joined the Tokyo Metropolitan Symphony Orchestra in 1991. She served as the principal viola player from 1999 until she left the orchestra in 2002.

She has participated in numerous renowned music festivals such as Marlboro (U.S.A.), Davos (Switzerland), Tokyo Summer Festival, and Kirishima. She has been regularly invited to Saito Kinen Orchestra, Ozawa Ongaku Juku, Mito Chamber Orchestra, and Marth Argerich Festival. Her performances with noted soloists such as Martha Argerich and Yuri Bashmet were highly acclaimed.

Kawamoto is also active as soloist and performed recitals at Nippon Steel Concert in November 1995 and at the 59th Promising Artists Series. Her recital series named "Haseko Classic Special / Yoshiko Kawamoto, the violist" which was held at Casals Hall, Tokyo for a year received acclaim both from public and critics. Kawamoto has performed as soloist under the baton of noted conductors such as Gary Bertini, Jean Fournet, and Peter Maag.

She was also invited to play at "Seven Stars Gala Concert" which was organized and performed by Mo. Myung-Whun Chung (conductor and pianist), and performed chamber concerts with the Maestro both in Korea and Japan. Her performance in July 2003 was reviewed in Asahi Newspaper, "Amazing flexibility. True viola virtuoso who can support other parts playing together with them." And she got The 45th TonenGeneral Music Award Western Classical Music Promotion Division in 2015.