Niccolò Paganini: Variations on 'God Save the King', Op. 9 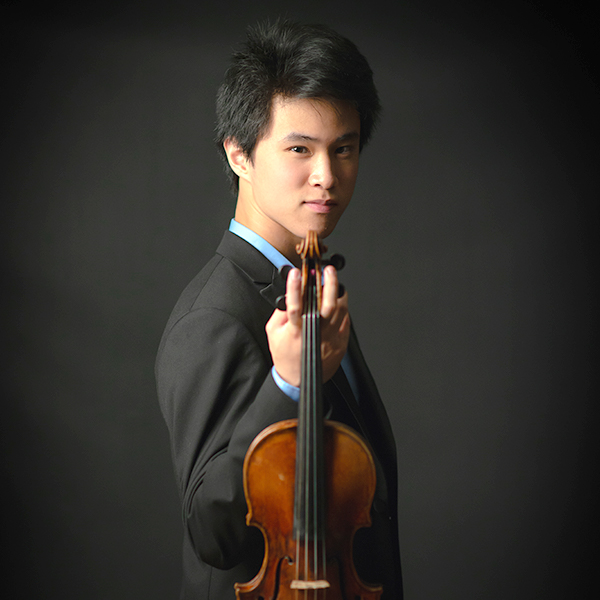 Eighteen-year-old Kevin Zhu has amassed an outstanding record of concert performances and competition wins since he began studying violin at age three. He has performed as a soloist at prestigious venues such as London's Royal Festival Hall, Mozart Hall of the Vienna Konzerthaus, Bologna's Teatro Comunale, China's National Centre for the Performing Arts, Moscow's International Performing Arts Center, Pittsburgh's Heinz Hall, and Austin's Long Center for the Performing Arts. His solo debut with London's Philharmonia Orchestra, one of the world's greatest orchestras, received a glowing review from venerable music magazine The Strad. On Kevin's performance of Sarasate's Carmen Fantasy, critic Tim Homfray writes: "Zhu is just brilliant. He gave a performance of awesome technical command and maturity, in which every devilish demand put his way by Sarasate was dispatched with ease and a proper degree of dramatic flair". Amati Magazine comments on Kevin's solo performance in Austin: "He has clearly continued to flourish, whipping through the virtuosic demands of the piece and playing with a complete command of the sultry, mature drama."

In April of 2018, Kevin won first prize in the 55th Paganini International Violin Competition in Genoa, Italy. He also received special prizes for being the youngest finalist and the best performance of a Paganini Caprice. In the 2012 Menuhin International Violin Competition in Beijing, Kevin was awarded first prize in the Junior Division, becoming the youngest-ever winner in the 29-year history of the competition. He also took home the Composer's Prize for the best performance of a new Chinese work.

Kevin had a very successful debut with the Vienna Chamber Orchestra at the Mozart Hall of the Vienna Konzerthaus, performing Vivaldi's Four Seasons. His recent performances include concerto appearances with the Moscow Virtuosi Orchestra, Pittsburgh Symphony Orchestra, and Leningrad Symphony Orchestra, as well as solo recitals in London, New York, Guangzhou, and across Italy. As a Culture Ambassador of the Lin Yao Ji Music Foundation of China, Kevin was a featured soloist at the Harpa International Music Academy in Iceland in 2013 and 2016. He has repeatedly been a featured artist on BBC Radio 3 and National Public Radio. Kevin's upcoming engagements include concerto appearances in Poland, as well as a series of solo recitals in Italy and China.

Kevin is a proud recipient of a Kovner Fellowship at The Juilliard School, where he studies with Mr. Itzhak Perlman and Professor Li Lin. He previously trained at the San Francisco Conservatory of Music with Li Lin and Ian Swensen.

Kevin performs on the c1722 "Lord Wandsworth" Antonio Stradivari violin, which is on loan from the Ryuji Ueno Foundation and Rare Violins In Consortium, Artists and Benefactors Collaborative.