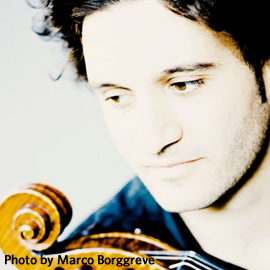 Renowned worldwide for his musical integrity and effortless virtuosity German-French cellist Nicolas Altstaedt is one of the most sought after and versatile artists today. As a soloist, conductor and artistic director of he enthralls audiences with repertoire spanning from the baroque to the contemporary.

At the beginning at the 17/18 season he performed the highly acclaimed Finnish Premiere of Esa-Pekka Salonen's new cello concerto under the baton of the composer at the Helsinki Festival. He will be Artist in Spotlight at the Concertgebouw in 17/18 and Artist in Residence 18/19 at the NDR Elbphilharmonie Hamburg, where is going to perform with Krzysztof Urbanski, Hannu Lintu and Christoph Eschenbach.  Later on he will be touring major european venues with the SWR Orchestra with Teodor Currentzis, the BBCSO, La Chambre Philharmonique with Emanuel Krivine and the Amsterdam Sinfonietta. Further engagements include debuts performances with the Detroit Symphony Orchestra, Yomiuri Nippon Symphony in Suntory Hall, Finnish Radio Symphony, Helsinki Philharmonic, Konzerthaus Orchestra Berlin with Juraj Valcuha, the Scottish Chamber as Soloist and conductor, Orchestre National de Belgique, Hongkong Sinfonietta and Les Violons du Roy as well as returning to the Deutsche Sinfonie-Orchester Berlin with Robin Ticciati.

In recital, Nicolas performs solo and with partners Fazil Say and Alexander Lonquich. He will tour both Europe and the US and will visit Istanbul, London Wigmore Hall, Bozar, Tonhalle Zurich, Koerner Hall Toronto, Theatre des Champs-Elysées, Amsterdam Concertgebouw and New York Carnegie Hall amongst others.
In Autumn 17 Nicolas toured  Australia extensively as part of a Musica Viva Recital tour with Aleksandar Madzar.

In 2012 Nicolas has been chosen by Gidon Kremer to become his successor as the new artistic director of the Lockenhaus Chamber Music Festival and in 2014, Adam Fischer asked him to follow in his footsteps as Artistic Director of the Haydn Philharmonie, with whom he regularly performs at the Vienna Konzerthaus, Esterházy Festival and will tour both China and Japan in the next season.

Nicolas' recent recording of CPE Bach Concertos on Hyperion with Arcangelo and Jonathan Cohen received the BBC Music Magazine Concerto Award 2017. This year, he released a Recital CD with Fazil Say on Warner. Previous recordings of cello concerti by Haydn, Schumann, Ligeti, Shostakovich and Weinberg have been acclaimed worldwide.
Nicolas Altstaedt was a BBC New Generation Artist 2010-2012 and a recipient of the "Borletti Buitoni Trust Fellowship" in 2009. He plays a Giulio Cesare Gigli cello, Rome around 1760.