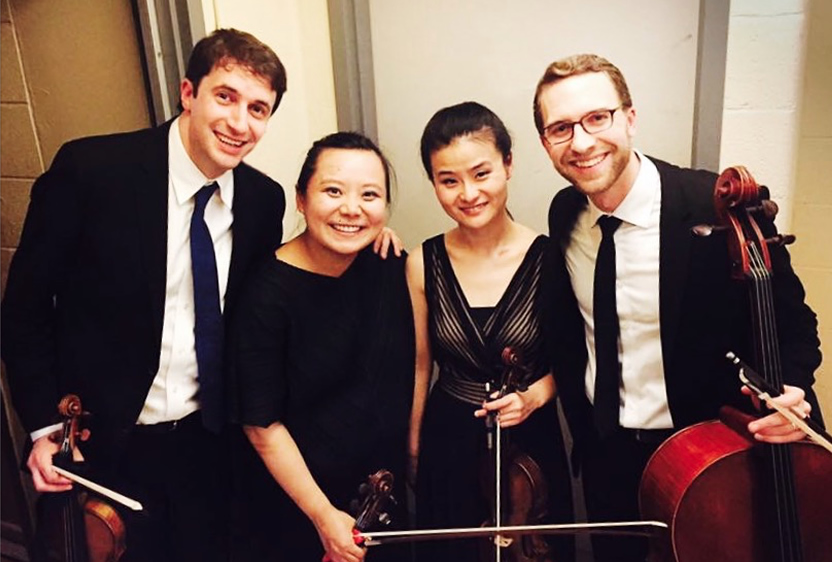 The Rosamunde String Quartet was founded in 2015 so that its members could pursue their passion for the string quartet repertoire. Made up of young stars from three of the world's greatest orchestras, the Berlin Philharmonic, the New York Philharmonic, and the Toronto Symphony Orchestra, they take time away from their international careers to create music together. Each member is an accomplished soloist and musician, and brings their unique voice to the ensemble. By uniting their experiences, they create a distinctive sound and unanimity of expression.

The quartet is made up of two Chinese and two American musicians. Violinist Shanshan Yao (New York Philharmonic), and violist Teng Li (Principal Violist, Toronto Symphony), share a similar musical heritage. Each studied in the major Chinese conservatories in Beijing and Shanghai before coming to the United States to continue their musical studies at the renowned Curtis Institute of Music in Philadelphia. Shanshan Yao studied under the renowned violinist Aaron Rosand, while Teng Li was a pupil of Michael Tree, the violist of the Guarneri Quartet. At the age of only 21, Ms. Li was named Principal Viola of the Toronto Symphony. Ms. Yao continued her studies at the Juilliard School in New York before joining ﬁrst the Pittsburgh Symphony, and then in 2013 the New York Philharmonic. Violinist Noah Bendix-Balgley (1st Concertmaster, Berlin Philharmonic) studied at the Indiana University Jacobs School of Music with Professor Mauricio Fuks, then continued his studies in Munich, Germany before he became Concertmaster of the Pittsburgh Symphony Orchestra. In 2014, he became the ﬁrst American to be named 1st Concertmaster of the Berlin Philharmonic. Cellist Nathan Vickery also spent time studying at Indiana University before earning his bachelor's degree at the Curtis Institute of Music, under the tutelage of Peter Wiley, cellist of the Beaux Arts Trio and Guarneri String Quartet. He joined the New York Philharmonic in 2013, as its youngest member.

The musicians of the Rosamunde String Quartet believe their different backgrounds and educational inﬂuences enrich their collaboration. They strive for music making that is informed, vibrant, and exciting. Above all, they hugely enjoy sharing their love of chamber music with each other and with audiences.