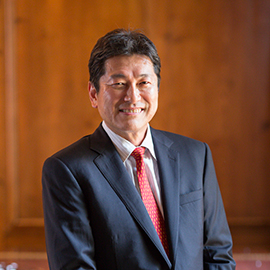 Dr. Ryuji Ueno, M.D., Ph.D. and Ph.D. is an internationally recognized scientist, innovator, entrepreneur, and philanthropist. Trained and certified as a Medical Doctor at Keio University School of Medicine in Japan, Dr. Ueno spent his academic career in the fields of pharmacology, physiology, and biochemistry at Columbia University, Kyoto University, Osaka University, and Stanford University. He has authored more than 100 articles in notable scientific journals. He is also passionate about classical music and is Founder and Executive Producer of the Ryuji Ueno Foundation.

In the 1980s, Dr. Ueno first discovered the tremendous therapeutic potential of prostones, a class of functional fatty acids. After 10 years of biomedical research, he founded R-Tech Ueno, Ltd., a biopharmaceutical company that developed Rescula® (unoprostone), an anti-glaucoma medicine that has been used by more than 500,000 patients in 45 countries. In 1996, Dr. Ueno moved to the United States and established Sucampo Pharmaceuticals (SCMP, Nasdaq), which successfully developed a second medicine, AMITIZA® (lubiprostone), to treat various gastrointestinal conditions.

Dr. Ueno has received numerous awards and recognitions over the years, including Nikkei BP Publications' Japan Innovator of the Year Award (2006), the Ernst & Young Entrepreneur of the Year Award for the Greater Washington Area in the Life Sciences Category (2006), honorary membership in the American Gastroenterological Association (2008), and the Foundation Fighting Blindness Visionary Award (2014).

In 2015, Dr. Ueno founded the Ryuji Ueno Foundation and serves as its Executive Producer. Through the foundation, Dr. Ueno produces more than 14 performances a year inviting world-renowned artists from around the globe. He also began the Potomac Music Lab Project, an incubator for classical music where world-class musicians can experiment with their craft. The Project includes The 6821 Quintet (6821 represents the distance in miles between Washington, DC, and Tokyo). The Quintet performed its world debut at the National Cherry Blossom Festival in 2016. Dr. Ueno has also created a leadership program for international music students to learn what it means to be a professional performing artist in the United States.

Dr. Ueno previously served as president of the Evermay Chamber Orchestra, which joined The Washington Ballet to present live performances of "Swan Lake" at the Kennedy Center Eisenhower Theatre in April 2015. He has also served as board member for The Washington Ballet (2014 – 2015) and committee chair for the S&R Washington Award (2000 – 2015). He currently is board member of The New Orchestra of Washington, Young Concert Artists in DC, and the Shanghai Symphony Orchestra. He is also the Sponsor and Chief Lecturer of the International Music Academy Liechtenstein's "Washington Semester" program.

Dr. Ueno is passionate about classical music and is a collector of musical instruments. He is a major supporter of music in the greater Washington, DC, area and is himself a dedicated amateur flutist. For his continued dedication and support of the arts, he has received the Mayor's Art Award for Visionary Leadership at the 30th Annual Mayor's Arts Award (2015), the Business Philanthropist of the Year Award from the Washington Business Journal (2015), and the ArtsMatter Award for contributing to the growth of the arts from the New Orchestra of Washington (2017).